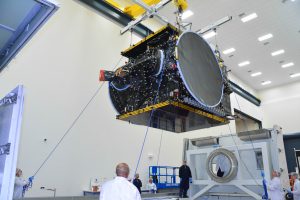 SSL has announced that the BulgariaSat-1 satellite, designed and built for Bulgaria Sat, an affiliate of Bulsatcom, has arrived at the Cape Canaveral Air Force Station, where it will be launched aboard a space-proven Falcon 9 vehicle provided by SpaceX. BulgariaSat-1 will be Bulgaria’s first satellite. SSL is a subsidiary of MacDonald, Dettwiler and Associates Ltd., a global communications and information company.

“SSL has a history of working closely with new satellite operators to help them move their businesses forward,” said John Celli, president of SSL. “We are pleased that this first satellite ever built for a company in Bulgaria has safely arrived at Cape Canaveral Air Force Station, and look forward to BulgariaSat-1 making history as the second satellite ever to launch on a Falcon 9 that has flown a previous mission. Launch vehicle reuse is an important enabler for the satellite industry.”

BulgariaSat-1 will provide high quality Direct-to-Home television and telecommunications services in the Balkans and other European regions. It is equipped with 30 Ku-band BSS transponders to broaden the availability of advanced television services such as high definition television.

“BulgariaSat-1 is an essential part of Bulsatcom’s strategy to expand high quality TV and communications offerings to meet customer demand,” said Maxim Zayakov, chief executive officer of Bulgaria Sat. “SSL has been an excellent partner in helping us make our vision a reality and we eagerly await next month’s launch.”

Based on the powerful SSL 1300 platform, the satellite is designed to provide service for 15 years or more.

Bulgariasat-1 and Ericsson partner for services

AsiaSat 9 to launch aboard ILS’ Proton

Amazonas 5 arrives at ILS in Baikonur