MBRSC’s bid proposal includes a thorough explanation about the UAE space sector, the importance of hosting IAC for the first time in an Arab and Islamic country and its positive impact on the space sector in the country 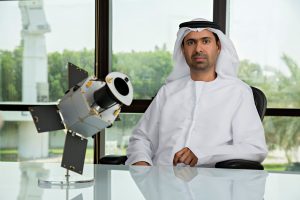 Mohammed bin Rashid Space Centre announced the submission of the official bid proposal to the International Astronautical Federation (IAF), to host the 71st International Astronautical Congress in 2020 in Dubai. IAF will announce the IAC’s 2020 hosting city on the last day of the coming edition that will take place in Adelaide, Australia between 25-29 September, 2017.

MBRSC’s bid proposal includes a thorough explanation about the UAE space sector, the importance of hosting IAC for the first time in an Arab and Islamic country and its positive impact on the space sector in the country and the region. In addition to that, the bid proposal mentioned the financial cost and various information about Dubai’s economic, cultural and tourism advantages.

“We have applied to host this global event in Dubai with stems from our strong international presence in the space field and our ambitious future vision for  space industry, research and sciences,” said Yousuf Hamad Al Shaibani, Director General, Mohammed Bin Rashid Space Centre.

Al-Shaibani pointed out that the centre “has the support of a large number of local and international entities to host the conference, which includes federal and local organisations, space agencies, space companies, in addition to a number of universities in the UAE.” He stressed on the coordination and cooperation with the UAE Space Agency in this regards, praising the Agency’s steps in boosting the UAE space sector into more leading positions on the global space map.

Al Shaibani added : “Dubai has several distinguished features and capabilities that make the city ready to host important and prestigous international conferences. It has a world-class infrastructure, logistic services, transportation systems, organizing plans, strategic geographic location and has a long history of organizing and hosting events.

“The UAE’s sustainable space program and the vision to attain the sector’s development in the country, region and the world are among the main pillars that distinguish us,” Al Shaibani concluded.

Eng. Salem Humaid Al Marri, Assistant Director General for Scientific and Technical Affairs at MBRSC said that a committee was established to prepare the official bid proposal, and will also be responsible for all the future procedures and requirements.

Al Marri praised “the efforts and support of the Department of Tourism and Commerce Marketing and their advisory role at all levels; logistics, operations and organizing”.

“Our success in hosting IAC 2020 will be an added value to the UAE’s space sector and showcase our capabilities and potential to attract world-class conferences to Dubai and the UAE,” Al Marri concluded.

EPI collaborates with MBRSC to manufacture components for MBZ satellite

NCC signs agreement with NigComSat for 5G services in Nigeria

Firefly Aerospace raises $75m in Series A round